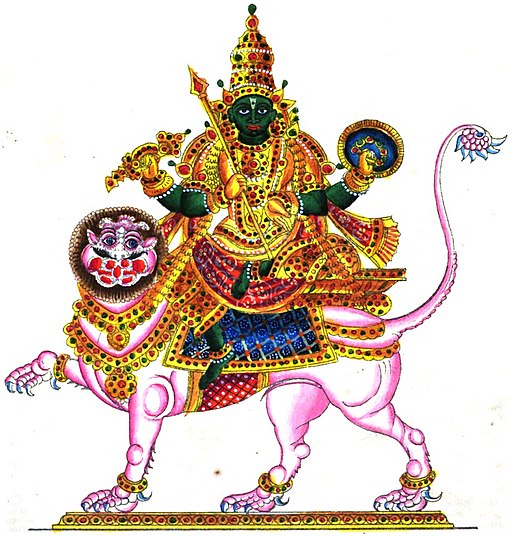 Rahu has both mythological and astronomical significance. In Hindu mythology, Rahu has found mention in the puranas in the "Kshir Sagar Manthan" episode. Rahu is also mentioned in the Buddhist mythology. In ancient astronomy, Rahu has been associated with eclipses. Rahu is not a real, physical planet, but is considered one of the nine major astronomical bodies, i.e, navagrahas. During the Samudra Manthana, while Mohini was distributing amrita to all the devas, an asura named Svarbhanu disguised himself as a deva and drank amrita, thereby achieving immortality.

When Surya and Chandra came to know of this, they complained to Vishnu. Angered by this, Vishnu used his sudarshan chakra on Svarbhanu, thereby beheading him. But since Svarbhanu had already consumed amrita, both his head and body were imortal. The behaded head of Svarbhanu came to be known as Rahu, whereas the body is Ketu. After this event, Rahu and Ketu were given the responsibility to influence the lives of humans.

Rahu has intense rivalry with Sun & Moon and is believed to cause their eclipses.

Rahu is one of the 9 astronomical bodies or the navagrahas, which are believed to influence lives of humans on earth. Rahu is the north lunar node or a shadow entity, and not a real planet.

In simple terms, it is the point of intersection of the paths of Sun and Moon as they move in the sky. In the image above, the ascending node is Rahu and the descending node is Ketu. Since eclipses of the Sun and Moon can happen only at these points, Rahu and Ketu are associated with Sun & moon and believed to cause eclipses.

What is Rahu Kaal

Rahu is believed to have powers to influence life of humans. Apart from the influence Rahu has on an individual's birth chart, it is also considered to influence certain times of the day - this period of time is called Rahu Kaal. Starting anything new is avoided during this time since it is considered inauspicious period.

Rahu Kaal, also spelled as Rahu Kaalam, Rahu Kaala, Raukaala, Raahu Kaala, Raahu kaal, or Rahu kalam is defined in the vedic astrology. Since Rahu is associated with eclipse of the Sun, it is considered inauspicious and the time period is avoided for starting any new venture.

Rahu Kaal is calculated based on the sunrise and sunset times at a particular location. Hence it varies across different locations and different days.

The time period between sunrise and sunset is divided into eight equal parts called Muhurts. Based on the day of the week, muhurts are considered as Rahu Kaal according to the table below.